Everyone Has a Dream: Man in Black is Back

Everyone Has a Dream: Man in Black is Back 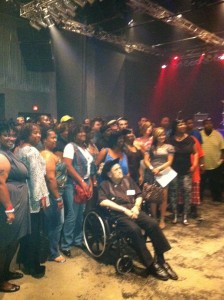 Roy Doiron, of Jeanerette, was first treated by Therapy Center therapists at Maison Teche Nursing Center. He was able to  return home, following rehabilitation, and achieved a personal goal on September 23rd, when he auditioned for Rox Star at Cypress Bayou Casino. The Man in Black serenaded the audience with an acapella version of Jambalaya. Roy will perform again on November 18th, as his performance qualified him for semi-finals. The Therapy Center congratulates you Roy Doiron! We are proud to see you benefit from all of your hard work! See Mr. Doiron’s performance below.

Story submitted by Danielle Keyser, OT/Mentor, and is pictured left with Mr. Doiron. Danielle accompanied Mr. Doiron to the competition and was part of making his dream a reality. Also pictured left is Mr. Doiron with his supporters and fans!