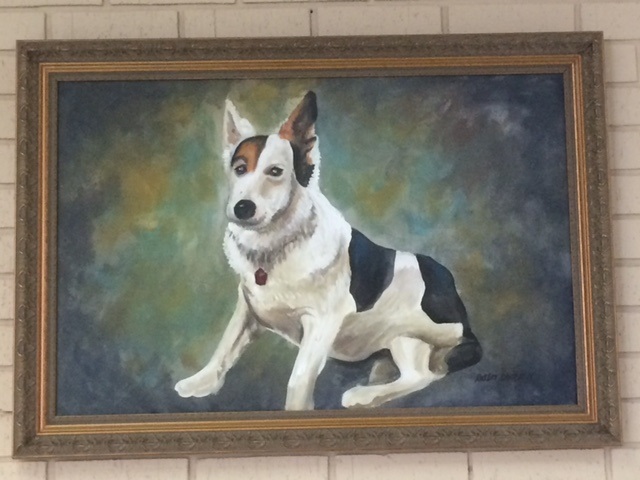 Story written by Jeanne L. LeBeouf, Speech Therapist in honor of Abbey and in celebration of National Pet Day on April 11th.

As many of you know from the article written on Abbey in 2011, Abbey was rescued at the age of 10 from the Acadia Parish Animal Shelter and has been our family pet, as well as a “therapy” dog for the past 5 years. Although she had heart worms and couldn’t be a “certified” therapy dog, you wouldn’t have known any differently. She listened and obeyed my every command and had the most gentle disposition.  I was told many times, “I’ve never seen a dog that well behaved.”   She was my first dog, my only dog, and my shadow.  She would jump in the front passenger seat every day on her ride to work at Gueydan Memorial Guest Home where she spent most of her days giving the residents who lived there reasons to smile, laugh, and love her.  Abbey spent many hours of her day following me throughout the nursing home, to and from the patients’ rooms, and even attended the staff meetings with me.

As Abbey aged, she eventually lost her hearing and would sleep most of the day in the therapy room corner on her bed, which was strategically 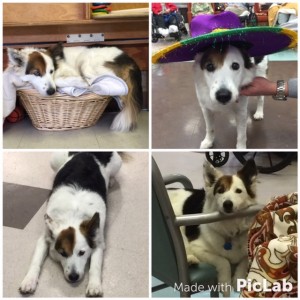 placed for all of the residents to see her as they attended therapy.  Over time, Abbey’s sight declined and she displayed some cognitive changes causing her to wander off and become “lost” in her very familiar environment, as well as withdraw socially from things she used to enjoy.  Abbey’s therapeutic effect became less hands-on as the residents took comfort in just watching her sleep, knowing she would be in her corner.  Eventually, I could see in her eyes that the burden of getting in and out of the car (even with me lifting her up and helping her out), walking to and from the nursing home entrance, and even going outside to relieve herself, had become too much for her.  As much as she wanted to be by my side, she physically couldn’t keep up.  She didn’t give up in the end, when she couldn’t give of herself anymore. As much as it pained her, she kept trying.  But I could see it, when she would look at me as if to say, “Please just let me be.  Just pet me, love me, and let me be.”  This look day in and day out, along with the loss of her senses and ability to get around, led me to the advice of her doctor, which was to let her go. 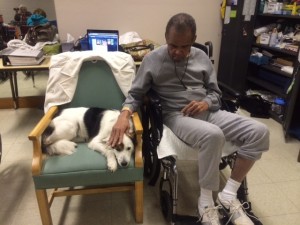 Abbey had 5 “bonus” years of life upon being rescued, and those years were full! Full of more love than any pet I have ever known.  The pain is eased when I look back at the memories of my loyal and devoted friend, who brought so much joy to every single life she touched.  After learning of her passing, many have shared their memories of Abbey with me and how she has impacted their lives – even people who I had no idea even knew her!   She taught me patience and showed unconditional love.  She wasn’t just my dog, or just our family dog, a piece of her belonged to everyone who knew her and loved her. Abbey’s spirit lives on inside the walls of Gueydan Memorial, with her own memorial photos displayed in patients’ rooms and with a special hand-painted portrait of Abbey (completed by Robert Baxter upon request of a resident’s family member) that was framed and hung in the nursing home for all to admire. As you can see, Abbey was more than a dog, or a therapy dog, she was one of us.

I would like to thank the Therapy Center for allowing me to incorporate Abbey into my speech therapy sessions daily.  Her presence allowed rich communication with the elderly and so many other health benefits that pet therapy is capable of!

If you enjoyed the story of Abbey, read ‘How a Pup Promotes Happiness and Health to Residents’ to learn more about how our therapists are using pet therapy to engage patients in the nursing home.